Before I get started, here’s some selective copy and paste action from Wikipedia that gives you the answer for that question in your head? What is a Tuatara?

“Tuatara are reptiles endemic to New Zealand. Their species flourished around 200 million years ago. (So they’re old like dinosaurs!)

They have a “third eye” which is thought to be involved in setting circadian and seasonal cycles. It has its own lens, cornea, retina with rod-like structures, and degenerated nerve connection to the brain, suggesting it evolved from a real eye.

Tuatara thrive in temperatures much lower than those tolerated by most reptiles, remaining active at temperatures as low as 41 °F, while temperatures over 82 °F are generally fatal. The average lifespan is about 60 years, but they can live to be well over 100 years old. Some experts believe that captive tuatara could live as long as 200 years.

In Māori culture, tuatara are featured in a number of indigenous legends, and are held as ariki (God forms). Tuatara are regarded as the messengers of Whiro, the god of death and disaster.”

So, with all of that, what does this mean to me? I knew that during my time in New Zealand that I needed to see a tuatara. Not wanted to, but needed to — it, they, were calling to me.

Tuatara are endangered species, so I wasn’t fooling myself by thinking that I’d have the opportunity to see one in the wild. I had a failed attempt at the Kelly Tarlton’s Sea Life Aquarium in Auckland — I peered into the glass box as elementary children on a field trip ran amok around me. And then we went to the tuatara house at Auckland Zoo.

When Lahi, Kekoa and I finally found the tuatara house (we’d been looking for a while), a stream of people poured out as we shuffled our way in. And when we got in there, it was just the three of us and the tuatara. They weren’t hiding, but rather, standing proudly at the front of their enclosure — looking directly at us — waiting for us — their knowing eyes wise with knowledge.

You are daughter of dragon.

These may seem like simple statements, but they were soul-shaking. The gravity of every word I could understand resonated in the deepest parts of me.

More than anything, of the messages above, the one that stood out most to me was “You are daughter of dragon.” You see, my mother was born in the year of the dragon. And I knew that these Māori dragons saw my mother as kin, and with her, me.

And so while I was still reeling from the explanation of what my spiritual role is, this was the universe also telling me that I am not alone on my journey.

I think that when I say I’m not alone, it’s not necessarily because there are others doing exactly what I am tasked to do — although I sure hope there are others like me, because going it alone seems such a daunting task — but that there are those out there who can guide and empower me and help me become.

Needless to say, I eventually made several offerings during my time in New Zealand, including finding a good home for that plastic dinosaur that joined me earlier in my travels. 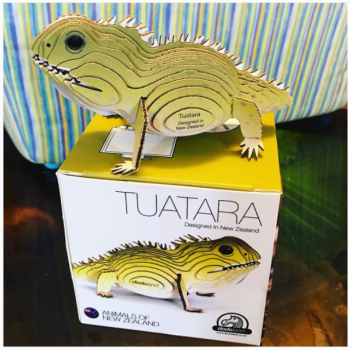 I also got this tuatara kit at the gift shop. I put him together months after our return from New Zealand because I was scolded by some greater power for not doing so sooner. As I spent the hour putting him together, I chanted and meditated and connected and he is now a totem who lives with me at work and keeps a knowing eye on me.

At some point, I need to bring him home, but he’s indicated that he can’t live in the altar with Ganesh and Buddha and my other protectors, so he’ll have to wait until I can find him a good place.

3 thoughts on “Tuatara – Messages from Dragons”